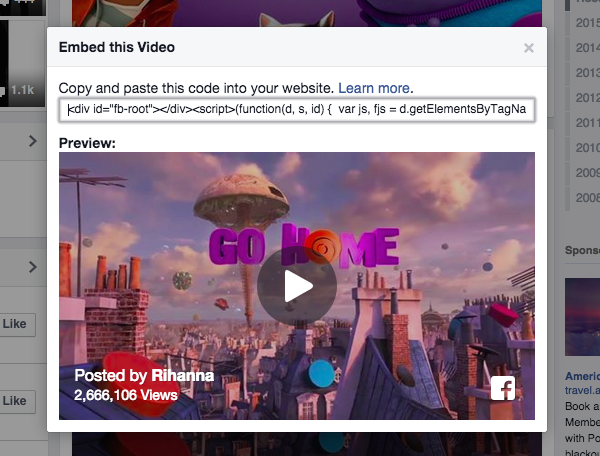 Facebook videos get 3 billion views every day, but up until now
there wasn’t an easy way to embed videos on other platforms.
YouTube says they have “billions of views” per day, but don’t
specify an exact number. YouTube hit 4 billion views a day in
2012. In other words, Facebook is catching up.

+Twitch Will Exclusively Stream All of Ultra
Music Festival

All that has changed.

Facebook announced numerous new features at their F8 developer
conference. One of the big changes is the ability to
embed videos. See below:

RiRi takes a ride with Oh! Are you ready for Home?

Facebook is also expanding Messenger into an entire
platform. This isn’t entirely surprising since the
messaging feature was moved to a dedicated app. Facebook also
recently added a payment feature to Messenger.

The new platform will make it easier to integrate and share
content from other apps on Facebook Messenger.
The platform will also support GIFs and sound clips.

The company also plans to launch Business on Messenger, a
service that would allow customers to have direct interaction
with companies.